Sankho Chowdhury was one of the formative influences in the changing horizon of modern Indian sculpture.

Under the tutelage of Ramkinkar Baij, at Kala Bhavan Santiniketan, Chowdhury’s experiment with material and process paved an unending scope of introducing unconventional mediums in to the field, which from nineteenth century onwards, was dominated by western classical modelling methods.

He rigorously experimented with cement, wood, metal, plaster, stucco, welding, aluminium sheets etc., indicating the turn of time and industry, remarkably expanding the material orientation of modern Indian sculpture. Chowdhury was born on 1916, in the Santhal Pargana of Bihar. His engagement with tribal forms and material culture was predominant in his works. He completed his diploma in sculpture in 1945 and then traveled to Nepal with Ramkinkar Baij to assist him to build a war memorial. In 1949, he traveled the length and breadth of Europe and exposed himself to various schools of art. But he didn’t allow his practice to be influenced by a distinct style. His simplified forms, his bold contouring and his projection of dimensionality is still regarded as unique and exemplary. 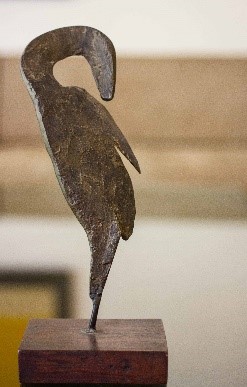 Sankho Chowdhury was also a prolific bureaucrat when it came to spearheading multiple art institutions of India. He was invited to take charge of the sculpture department of M S University in Baroda, where he joined as a reader and head of the department in 1949. In about seventeen years, he supervised the Faculty of Fine Arts as its Dean. Along with various other responsible membership positions in various organisations like, Delhi Urban Commission, All India Handicrafts Board, 5th India Triennale, India Sculptor’s Association, he also took charge of Lalit Kala Akademi, New Delhi and created Garhi Artists’ Studio in 1976.

His wife and a pioneering ceramicist, Ira Chowdhury, who also studied with him in Santiniketan, recollects, “Gradually Sankho started collecting craft objects and artifacts, vehemently commenting on the tribal’s need to embellish objects of daily use, unlike civilised urban people who have lost all feelings for the look of utilitarian objects. During his tenure in Baroda he visited many Adivasi areas in Gujrat and often took students along. Some of them got interested in tribal art. But there was no system to his collection: anything that he liked, could afford or could be carried away from classical bronzes to musical instruments or kitchen utensils. The best of his bronzes were acquired by the National Museum in 1980. A stint in Tanzania allowed him to add African objects to the collection.” 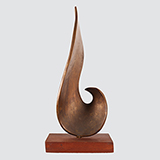 The Indira Gandhi Rastriya Manav Sangrahalaya also called the Museum of Man is built from a generous contribution of anthropological objects from the artist. His sculptures were fiercely exhibited across the country and abroad and his art was highly valued by art patrons with significant commission projects for All India Radio; Bronze Statue of Mahatma Gandhi, now in Rio de Janeiro; Stainless Steel Rotating Sculpture for Jyoti Ltd Baroda; Brass Sculpture for World Bank, commissioned by Govt. of India; Bronze Sculpture of Mahatma Gandhi for Copenhagen; Marble Sculpture for UNICEF, New; Marble Sculpture for Habitat, Nairobi.  The Government of India honoured Sankho Chowdhury with Padmashri in 1971.