Stated below is the text of the second catalogue of the Bombay Progressive Artists' Group in collaboration with the Calcutta Group. Gobardhan Ash's works were exhibited in the joint show of the Calcutta Group and Progressive Artists’ Group alongside masters such as K.H. Ara, Francis Newton Souza, Maqbool Fida Husain, S.H. Raza, H.A. Gade, and S.K. Bakre at Calcutta in 1950. This document is indeed a historically prominent yet lesser-known artistic discovery in the world of modern Indian art. 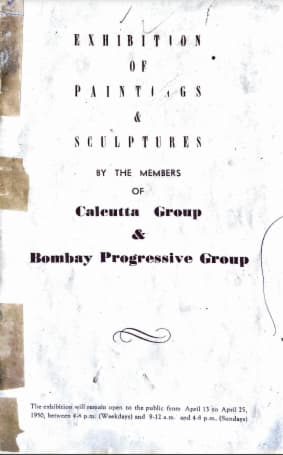 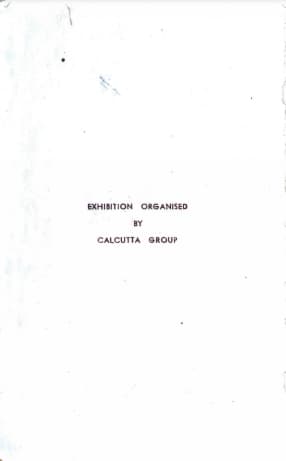 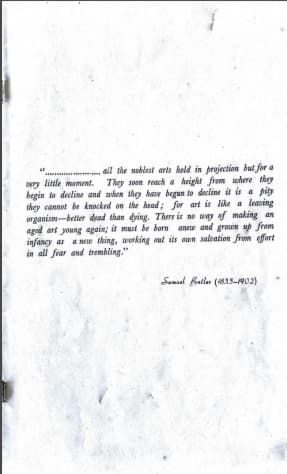 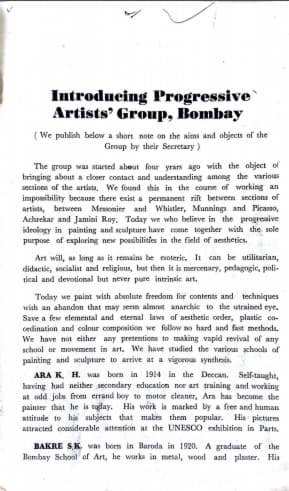 "The group was started about four years ago with the object of bringing about a closer contact and understanding among the various sections of the artists. We found this in the course of working an impossibility because there exists a permanent rift between sections of artists, between Messonier and Whistler, Munnings and Picasso, Achrekar and Jamini Roy. Today we who believe in the progressive ideology in painting and sculpture have come together with the sole purpose of exploring new possibilities in the field of aesthetics.

Art will. As long as it remains to be esoteric. It can be utilitarian, didactic, socialist, and religious, but then it is mercenary, pedagogic, political, and devotional but never pure intrinsic art.

Today we paint with absolute freedom for contents and techniques with an abandon that may seem almost anarchic to the untrained eye. Save a few elemental and eternal laws of aesthetic order, plastic co-ordination, and color composition we follow no hard and fast methods. We have not either any pretensions to making a vapid revival of any school or movement in art. We have studied the various schools of painting and sculpture to arrive at a vigorous synthesis.

ARA. K. H. was born in 1914 in the Deccan. Self-taught having had neither secondary education nor art training and working at odd jobs from errand boy to motor cleaner, Ara has become the painter that he is today. His work is marked by a free and human attitude to his subjects that makes them popular. His pictures attracted considerable attention at the UNESCO exhibition in Parts.

BAKRE S.K. was born in Baroda in 1920. A graduate of the Bombay School of Art, he works in metal, wood, and plaster. His sculptures, on the whole, are expressional and experimental and his recent abstract ones have evoked considerable interest. 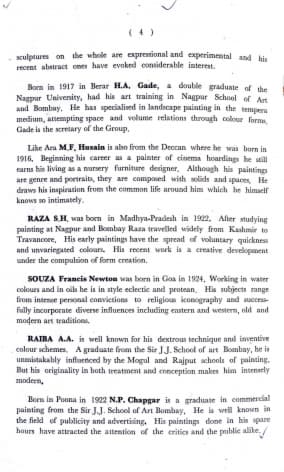 Born in 1917 in Berar H.A. Gade, a double graduate of the Nagpur University, had his art training in Nagpur School of Art and Bombay. He has specialized in landscape painting in the tempera medium, attempting space and volume relations through color forms. Gade is the secretary of the Group.

Like Ara, M.F. Husain is also from Deccan where he was born in 1916. Beginning his career as a painter of cinema hoardings he still earns his living as a nursery furniture designer. Although his paintings are genre and portraits, they are composed of solids and spaces. He draws his inspiration from the common life around him which he knows so intimately.

RAZA S.H. was born in Madhya Pradesh in 1922. After studying painting at Nagpur and Bombay Raza traveled widely from Kashmir to Travancore. His early paintings have the spread of voluntary quickness and unvariegated colors. His recent work is a creative development under the compulsion of form creation.

SOUZA Francis Newton was born in Goa in 1924. Working in watercolors and oils he is in style eclectic and protean. His subjects range from intense personal convictions to religious iconography and successfully incorporate diverse influences including eastern and western, old and modern art traditions.

RAIBA A.A. is well known for his dextrous technique and inventive color schemes. A graduate from the Sir J.J. School of Art, Bombay, he is unmistakably influenced by the Mogul and Rajput schools of painting. But his originality in both treatment and conception makes him intensely modern.

Born in Poona in 1922 N.P. Chapgar is a graduate in commercial painting from the Sir J.J. School of Art Bombay. He is well known in the field of publicity and advertising. His paintings done in his spare hours have attracted the attention of the critics and the public alike." 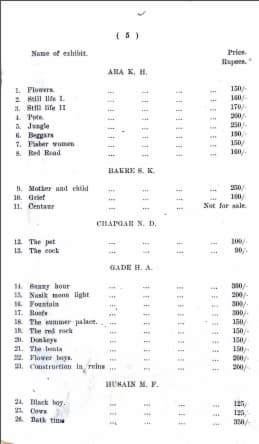 The first Progressive Artists' Group exhibition was the inaugural show at the Bombay Art Society Salon in 1949. The second show followed in Calcutta in 1950. The interaction between the Calcutta Group of Bengal and the PAG artists played a role in holding this joint exhibition, where "the critics interpreted the staging of the joint show as a challenge to the conservative art critics and the painters were admired as the precursors of a new movement". 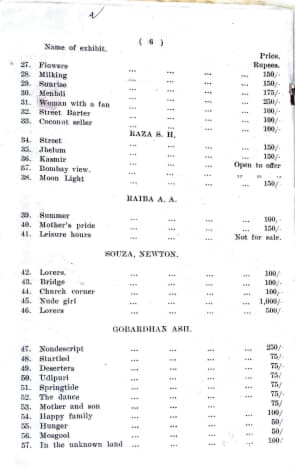 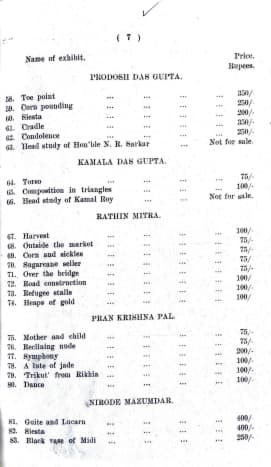 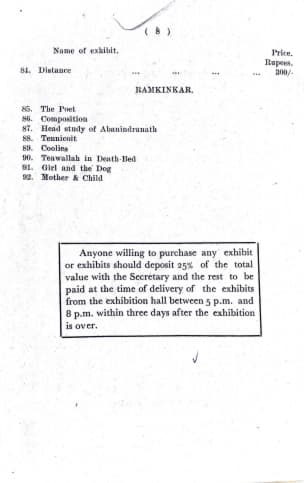 The last group show of the PAG was held in 1953. By this time new members had been associated for the purpose of exhibitions, which included, Krishan Khanna, Gaitonde, and Akbar Padamsee. It also included the only woman member of the PAG- Bhanu Rajopadhye Athaiya.